There have been three things that together have made the iPhone the ultimate portable camera: the actual camera components, portability and the computer that’s attached to it.

Today’s new iPhone XS seem to be a big step forward on the computer section. The nee A12 Bionic seems like it will be able to do a lot for photos and videos by how they process and create the images.

So what’s new? First, the actual camera was upgraded, but it’s not totally clear what those upgrades mean. Better sensor and a new camera system.

But the really exciting parts are how the phone will handle the images once they are taken. According to Apple, the A12 can do a trillion operations on a photo. I’ve spent a lot of time doing small edits on a photo, but nothing this close.

Apple described this as computational photography — “a new era of photography.” It seems like it very well could be. All of the features seems great, but like with any camera, we’ll have to see what photographers can do once they get it in their hands, anything more would be pure speculation.

But from the announcement, it’s all about the internals of the camera, the chip and how the phone processes the photos it takes.

Watch the keynote here — the camera section begins at 1:06:00

Here’s a breakdown of what stood out to me during the keynote:

HDR is a format of photos that take several different exposures and combine them into one image. A classic HDR takes an exposed image and captures an additional underexposed and overexposed image to create a fuller and richer image, closer to what the eye can see.

Smart HDR will do this on a scale we’ve never seen before with speed that’s instantaneous.

Apple mentioned Zero shutter lag — where the iPhone will take four frames in a buffer before you even trigger the shutter. I wonder how this compares with the Live Photos buffer we have now. But what’s new are the highlight and shadow priority photos it’s grabbing with Smart HDR.

A great example is the photo of the man flicking his hair in the water. The way Smart HDR tones down the sun to not overexpose the entire photo is a great example of what this new technology can do. 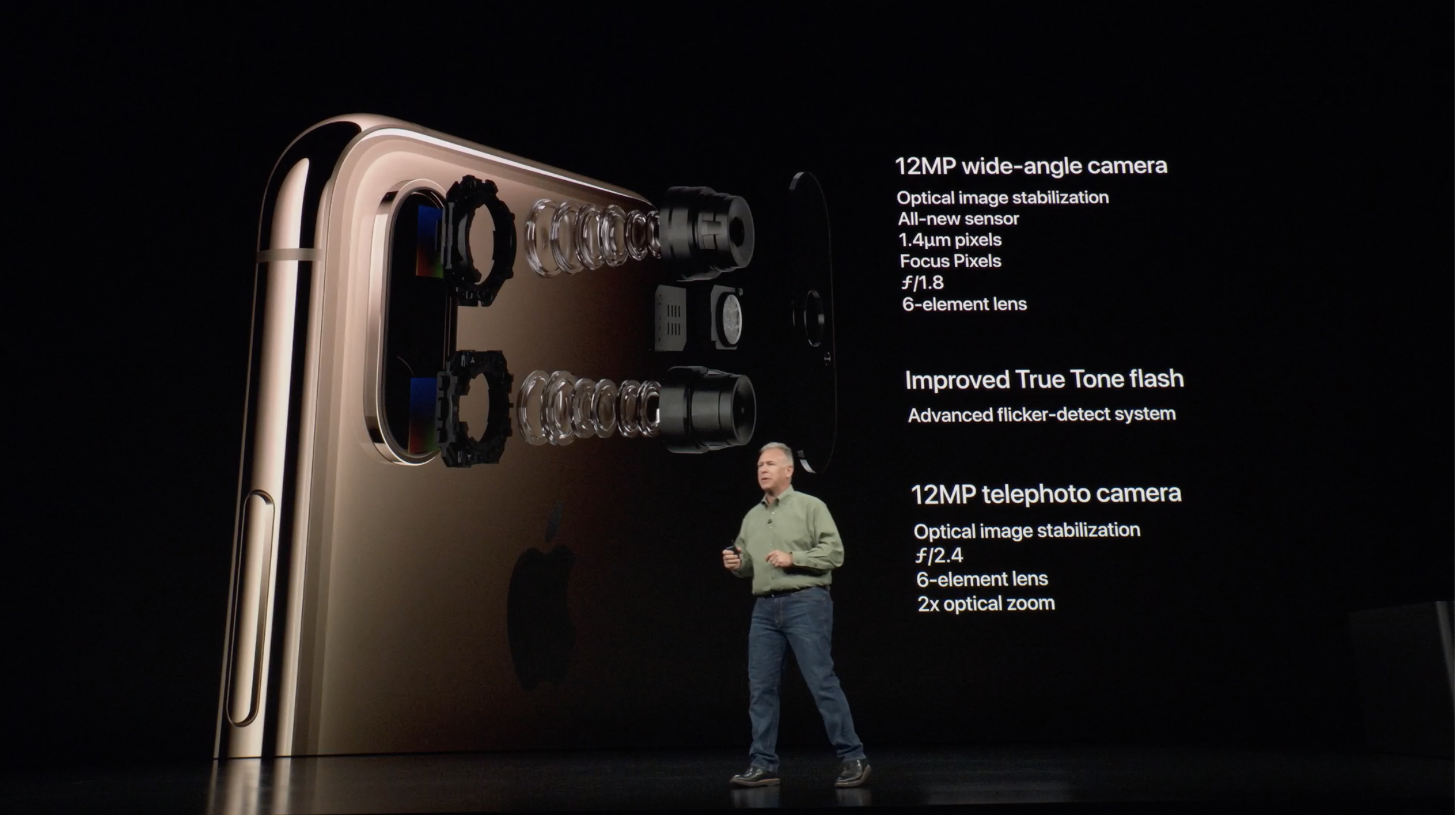 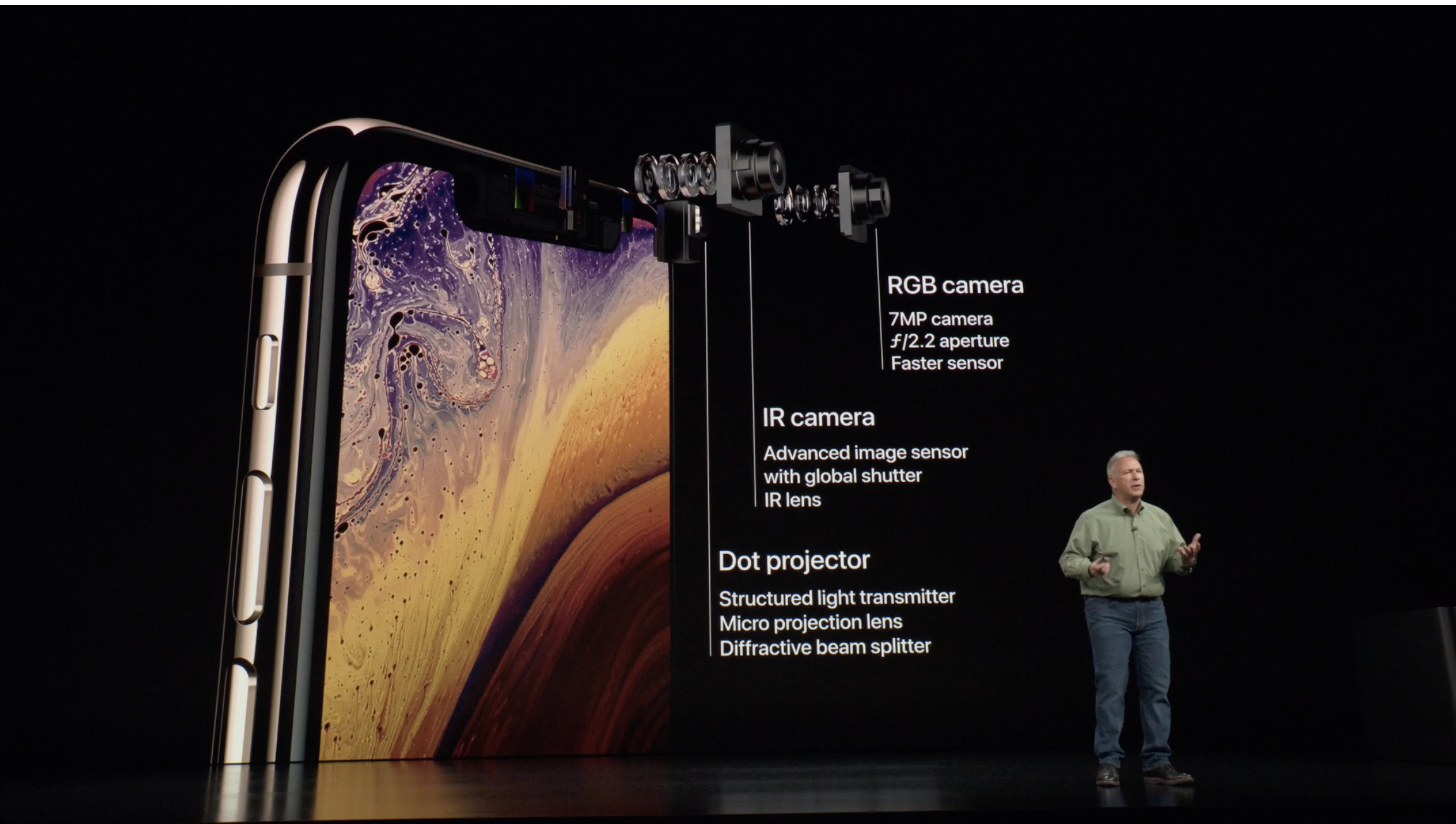 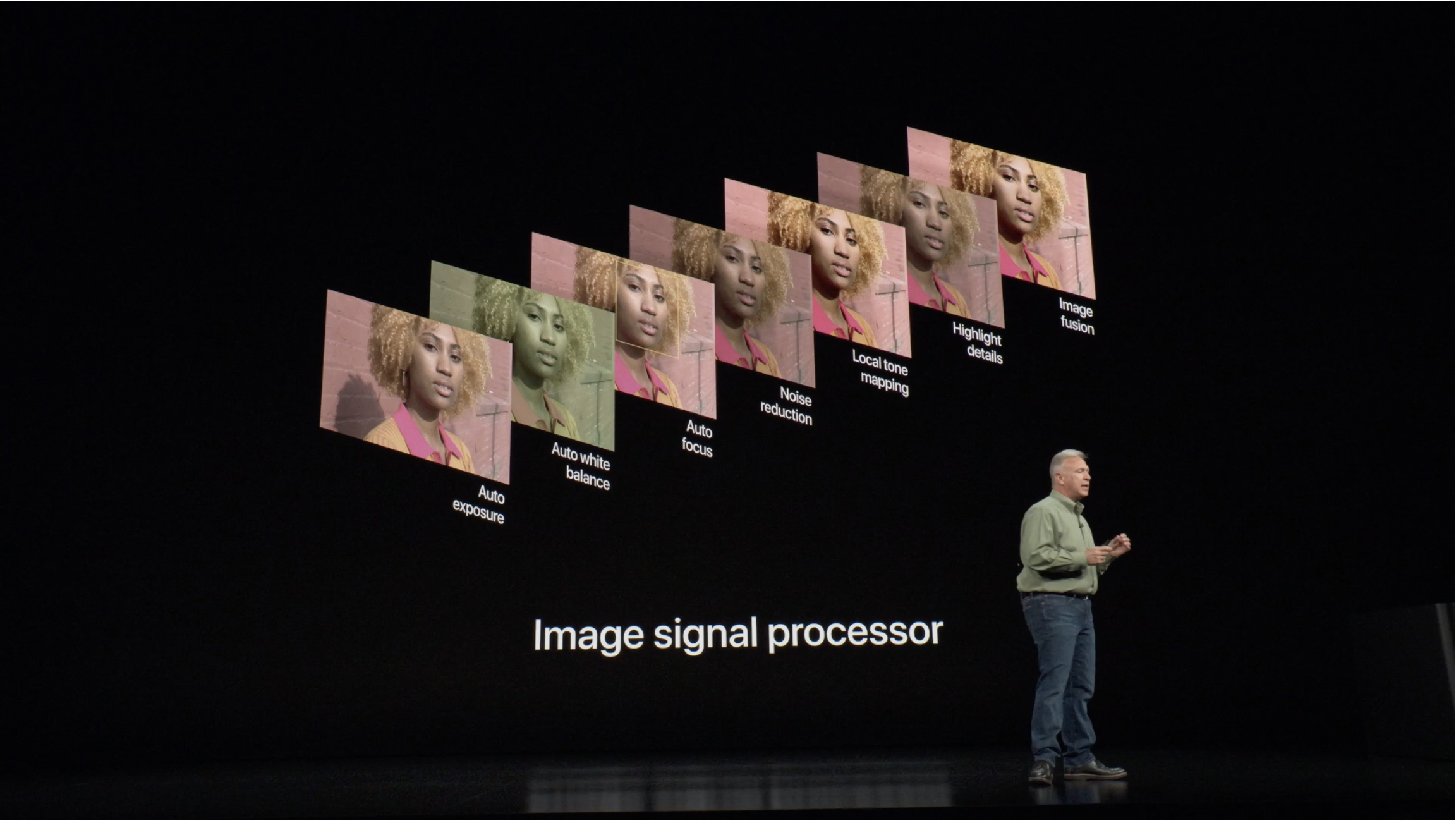 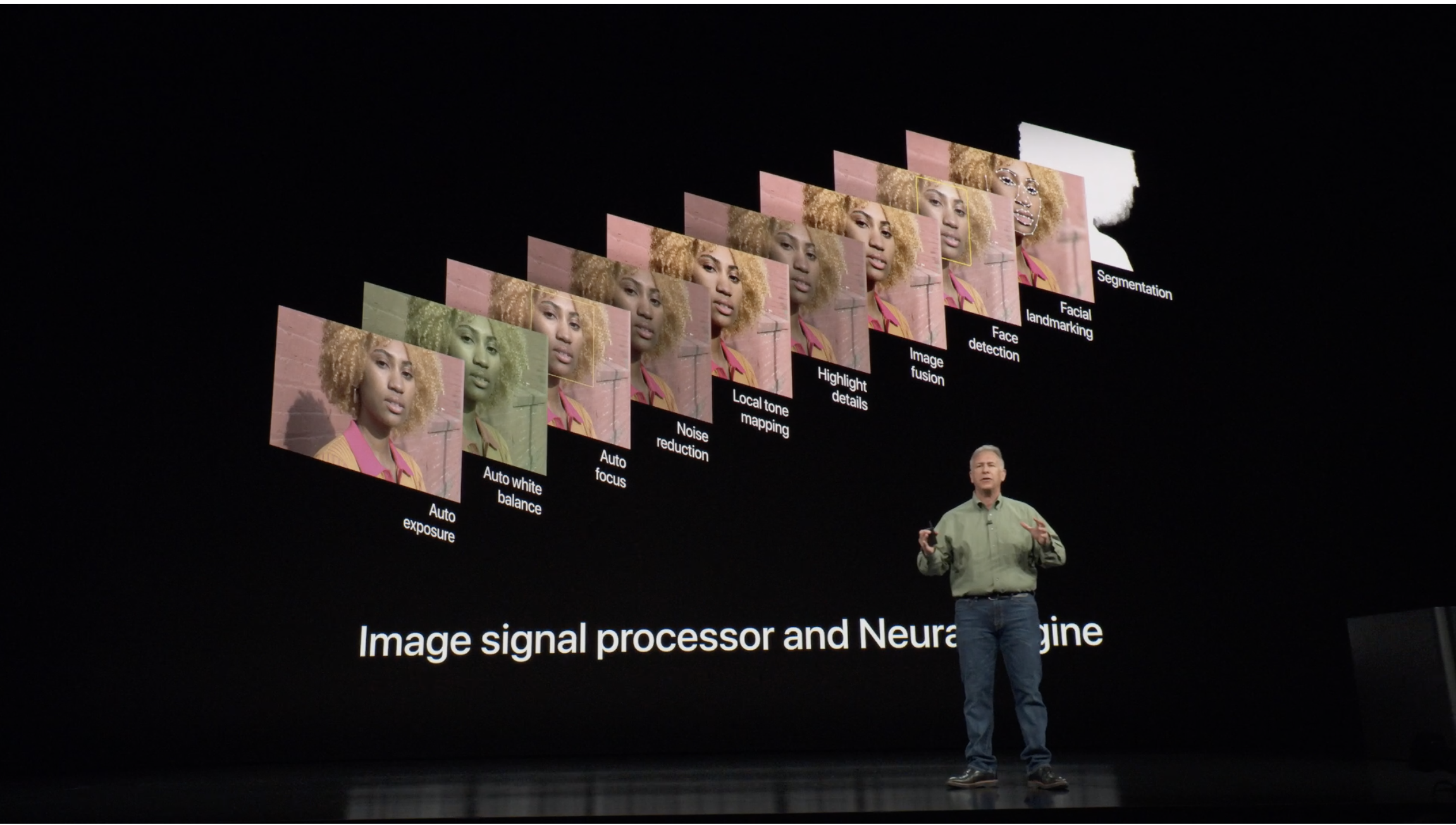 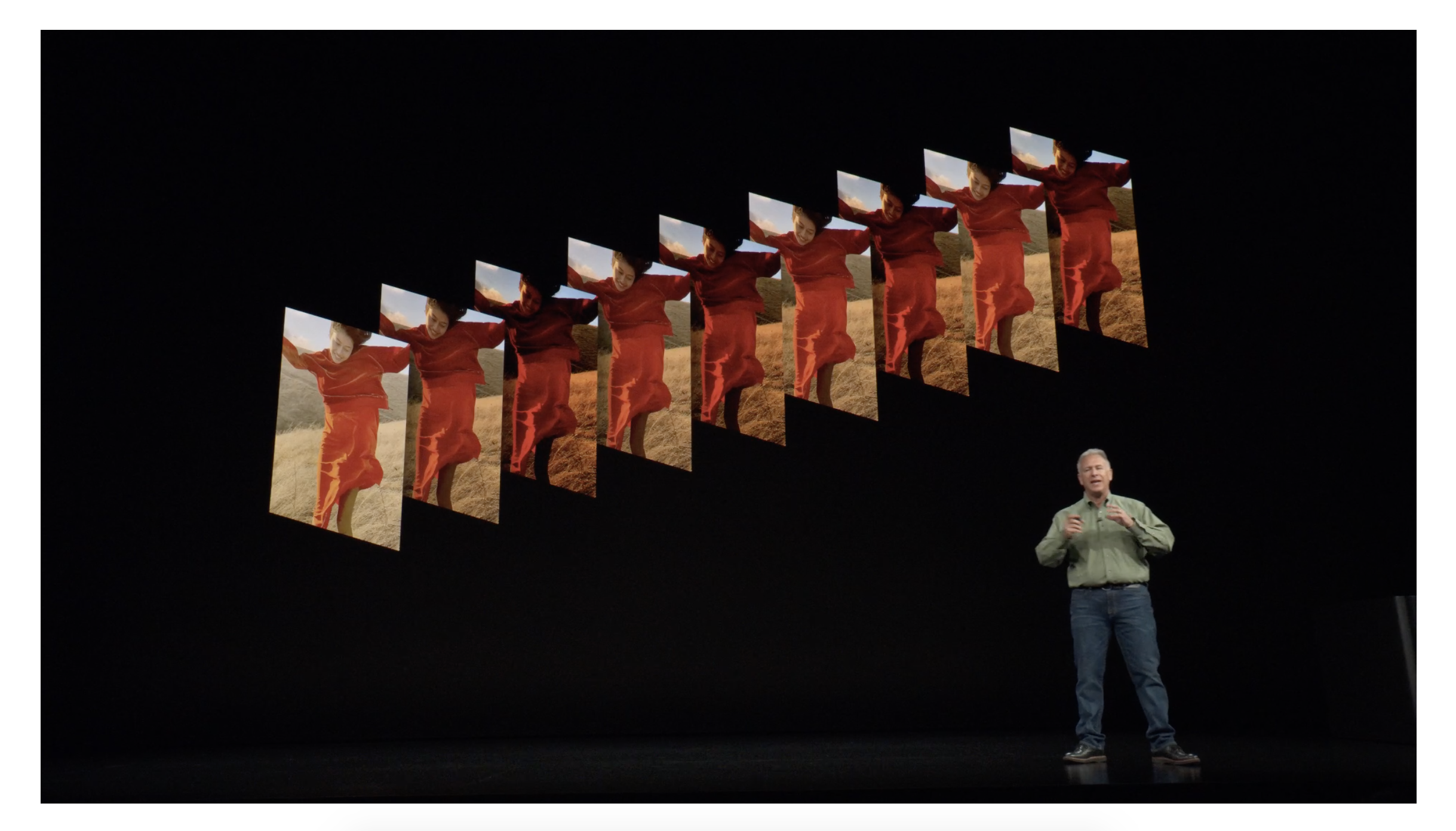 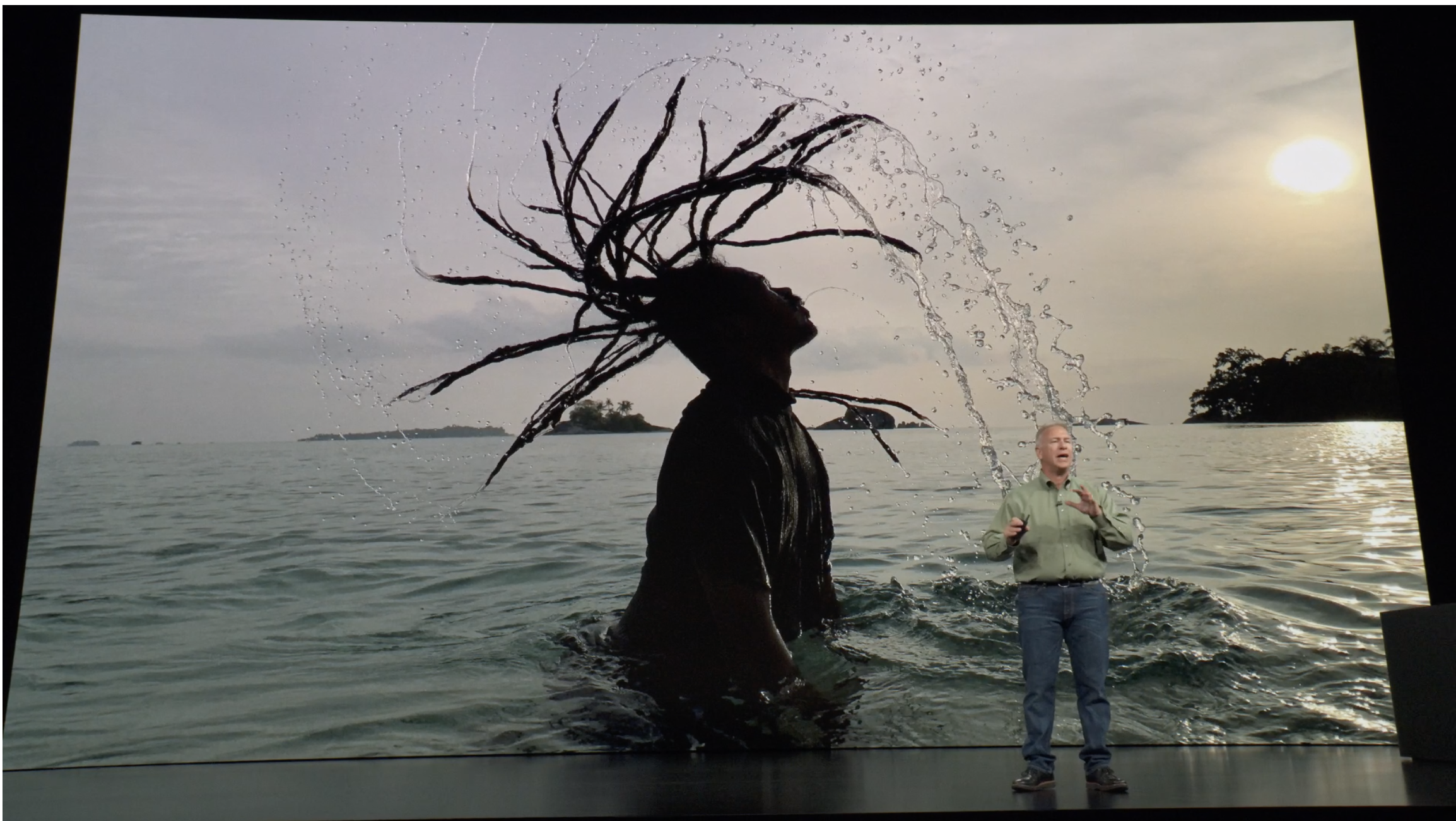 All images from Apple’s event stream

With current Portrait mode photos, the bokeh and aperture settings can be adjusted in post production, using third party apps like Foto. To have this built in to the system editing makes sense, and I’m interested to see how the A12 chip does this compared with the current tools we have. To be able to change this is huge, but not totally new.

Twice as fast sensor and four microphones allow for new stereo audio recording. The example video Apple shared looks great — I wonder if it was all recorded freehand or if tripods and gimbals were used.

Something I really like about the new iPhone XS is that the camera is the same in both sizes. Previously, the former “Plus” model had a more advance camera. Today, they are the same and what phone you get comes down to what size you want to use. That’s great news. As someone who does a lot of one-handed photography, I like the XS model, but the XS Max is tempting for the larger screen to edit.

Should you upgrade? Will you get better pictures with this new phone than your current phone? These are the questions everyone has. I will have an article later when the phones are out with more details on making that decision.

Pocket Camera is all about taking better photos and videos with the camera you have with you. I’m not one to say you need the latest and greatest phone to make compelling images. But the newer technology and lenses can be helpful.

So at first glance at the new phones, I think an upgrade would be beneficial if you have an iPhone 7 or 8. If you have the 7 Plus, you should see a noticeable increase in the camera quality. For the 8 Plus, that’s up in the air. As someone who has an iPhone X, I’m on the fence on wether I will upgrade or not, but am really interesting in seeing what the A12 chip can do.